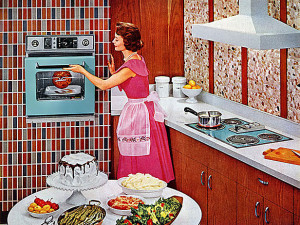 I’m a terrible housewife. Bree Van de Kamp I am not. Sure I can whip up a few emergency brownies and my Yorkshire puddings are passable, but it doesn’t come easy to me. My husband is forever baffled by my ability to spread dirt while attempting to clean it up. Slapdash should be my middle name. I get it done, but in a haphazard way. Somehow I mostly manage to conceal this flaw to the outside world. Pop over to my house and it all looks in reasonable shape, but open a cupboard and the truth will come tumbling forth.

Before you pull out the feminist card, I don’t hold old fashion views that housework and childcare are a woman’s duty. My husband and I both work and he definitely does his fair share, often more as he likes to point out. But it would be much less stressful if I could breeze through my half. I’ve got friends though to whom it all comes naturally. With their abundantly stocked fridges that make my husband weep, their fluffy guest towels and weekly food planning charts – they’ve made it in my eyes. They are officially grown up. I on the other hand still feel like a student with my mismatched crockery and a ten year old Nespresso machine that drips out questionable coffee. My boys get sent off to school with triple holes in their socks and a limp sandwich for their lunch, sporting wonky fringes that I’ve panic cut on the kitchen top. In short, I feel like I’m constantly treading water in our family clutter, praying I won’t finally drown in a pit full of laundry and Lego.

Last month my oldest school friend came to stay. She is Queen Bree – the ultimate domestic goddess, managing to run a seamless household, work AND bring up three respectable human beings. Soon after having her first child I remember her telling me how she could make a roast chicken last a whole week, yes a whole week. Roast dinner with all the trimmings, curry, soup…the list went on. I was awestruck. So impressed was my husband that when I was about to go on maternity leave he kindly suggested I go stay with her for a crash course in housewifey tasks. He’s so tactful.

Deciding that no training was needed, thank you very much, I embarked on my first maternity leave, only to discover the true magnitude of my failings. I had this romantic vision that my time ‘off’ would involve coffee mornings and beautiful walks, while having the time to keep the house spotless and rustle up delicious, hearty food. WRONG. Well I perfected the first part, but I loathed being at home for so much of the time. I was constantly aware of any mess. Breastfeeding on the sofa I could see the layers of dust building up. It gave me a twitchy eye. But with a colicky baby who wouldn’t sleep unless he was strapped to me in a convoluted hippy scarf and marched around in the fresh air, it was impossible to keep on top of things.

Maternity leave round two was even worse. My husband would poke his head nervously around the door after a day’s work to see which version of me awaited him. The smug one stirring a casserole, wine in hand, kids bathed and playing happily; or more often than not, the harassed one tackling a toddler doused in yogurt, while annihilating a frozen pizza. By maternity leave round three I had abandoned any efforts to excel in household duties. Then it was purely about survival.

So I’ve come to understand that my strengths lie in other areas. Organising my social life, for example, I’m great at that. I thought I had made peace with my shortcomings, but during my friend’s recent stay, they were highlighted again. While I was out at work my lovely friend swooped around my house like Mary Poppins, magicking away the dirt. She even saw the bottom of our washing basket and attempted to solve sock-gate (though gave up when she realised it was beyond even her). I came home to organisation. It was like receiving the best hug. But bizarrely it made me feel a little sad too. Sometimes I wish I was the kind of host who can produce freshly baked cakes, that don’t resemble toast, when friends arrive on spec; or the kind of mum who maintains a beautifully replenished craft box. I’m currently obsessed with the explosion of Instagram mums who can lunge and plank while simultaneously loading the dishwasher and whizzing up kale smoothies for their toddlers. I get as far as putting on my active wear but it just gets smeared with Weetabix and drool. The kale meanwhile rots away in the depths of my fridge.

After my fairy friend returned to the UK and normal chaos resumed, I decided that maybe I’ve been setting my targets too high. I’m never going to be a Bree, it’s not in my make up. So if I just lower my expectations then I wouldn’t feel inadequate. An antenatal leader once told our group that when she got to number three she just had to abandon the house stuff and be a mum. Some can do both. I’m definitely not one of them.

I take solace in the fact I’m not alone. I’m sure that there are plenty of other women out there with secret cupboards, even Monica from Friends had one! And if I poked around an Instagram mum’s house I’d most probably find an odd sock or two lurking about. I reassure myself that I have three happy and healthy boys, albeit with bowl haircuts, and my house is cosy and lived-in. So from now on I’ll focus on what I do well and apply a just good enough rule for everything else.

A roast chicken barely makes one meal for our ravenous brood these days. I have no idea how I’ll manage to keep up with them in the adolescent years. No doubt I’ll be muddling my way through it all. No weekly plan in sight.